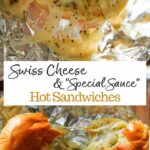 THIS is the reason I made homemade sweet pickle relish and from-scratch Kaiser rolls.

These Swiss cheese and “special sauce” sandwiches are another recipe from my Grandma’s collection.

For many low-key family gatherings she often makes a ham and cheese version for the majority of the family, but for the few vegetarians in the group she also makes a special batch without ham.

(They also go great served with her pea salad.)

Technically I’m not sure if I should be calling these sliders, because those are often known as mini burgers. But google also tells me the term could have originated from hot sandwiches that “slide” down easily.

A stretch? Maybe. But we’re going to go with it because what else do I call it? It’s not a grilled cheese. A “baked cheese sandwich” doesn’t have the same ring to it.

My grandma simply calls them the ham and cheese sandwiches, so leaving out the ham presents a dilemma – calling this a simple cheese sandwich does it no justice. And if you’re someone upset over me calling these sliders, you’re probably also one of the people who argue with me about my apple nachos. I see you. It’ll be okay.

Who knew naming a recipe could be such a tricky thing?

So “sliders” or not, let me get on to telling you the recipe for these delicious (and super simple) Swiss cheese hot sandwiches.

Your family may have a similar ham and cheese hot sandwich recipe, as I’ve seen them often referred to as Hawaiian sandwiches (made on Hawaiian rolls). But this recipe has a few key differences.

Side note: If you’re using honey mustard or relish straight from the fridge, it’ll probably be cold enough to solidify your melted better, and you’ll need to melt it again for easier spreading. Same applies if you save some sauce for later use.

Your family may have a similar ham and cheese hot sandwich recipe, as I’ve seen them often referred to as Hawaiian sandwiches (made on Hawaiian rolls). But this recipe has a few key differences.

Now for the bun: I’ve used regular hamburger buns, as evidenced by many of the pictures, but it is even THAT much better on a crusty bun (like French hamburger buns or Kaiser rolls). Since poppy seeds are in the sauce, I think they play nicely with poppy seeds on Kaiser’s too.

The cheese: I like to buy the package of thinly sliced Swiss Cheese, where it comes in lat least 20 slices per 8 oz. pack. (Sometimes 40!) That way you have at least a good 2-3 slices per sandwich you can layer or cut in half as needed.

Layering the Swiss cheese slices on either side of the bun with the sauce in the middle is the best way to put them together if refrigerating (or freezing) for later, so that the bread doesn’t get soggy! {Great way to prep ahead!}

You could also just keep the extra sauce refrigerated and apply fresh to sandwiches when ready to bake.

But if making right away I usually put the sauce right on the bread, on top of the cheese, and on the other piece of bread. Layer it up.

You then wrap each one in foil (or foil packets) and bake at 350°F until cheese melts.

15 minutes is usually a good amount of time.

Can even heat them on a grill if you’re tailgating!

THEN if you have extra sauce left over, I like to add some right on top for extra buttery goodness.

Or make more sandwiches, your call.

But the sauce is oh so good.

I’m telling you, these are always a hit! It’s not uncommon for people to grab 2 or 3 of these at a time because they are so good. And they “slide” right down 🙂

*Can use other rolls (like hamburger buns or French hamburger buns) but I find the Kaiser rolls with poppy seeds to be the best combination!

**Try to get a thinly sliced Swiss Cheese with 20 or more slices in a pack. Then you can add 2-3 slices per sandwich! Or if cutting your own block of Swiss cheese, it would be about 1 oz. per sandwich.

***Can wrap sandwiches in foil and refrigerate or freeze for later baking. See post for make-ahead tips.