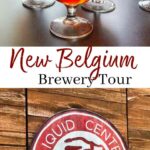 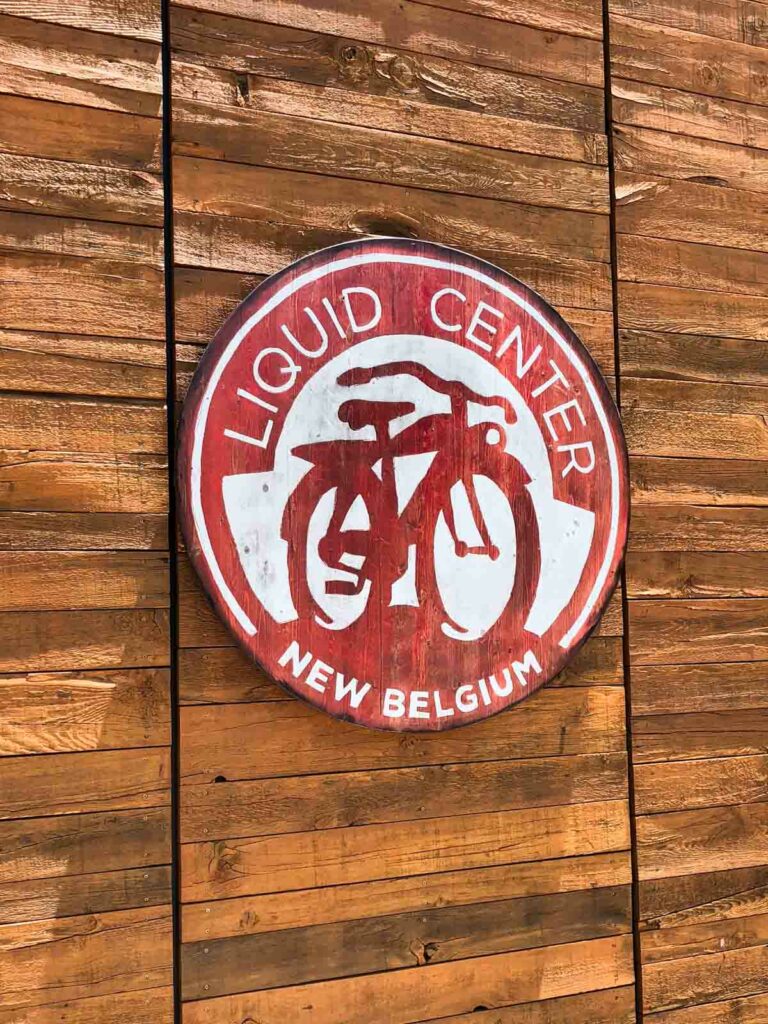 Earlier this summer I went on a wheat and dairy farm tour in western NC.

Not only did we get to tour a dairy farm, a wheat farm, a MilkCo production facility, explore local Asheville restaurants AND stay in downtown bed and breakfasts – we also were able to eat (and drink!) things that included wheat and dairy.

What kind of wheat do you drink? BEER. 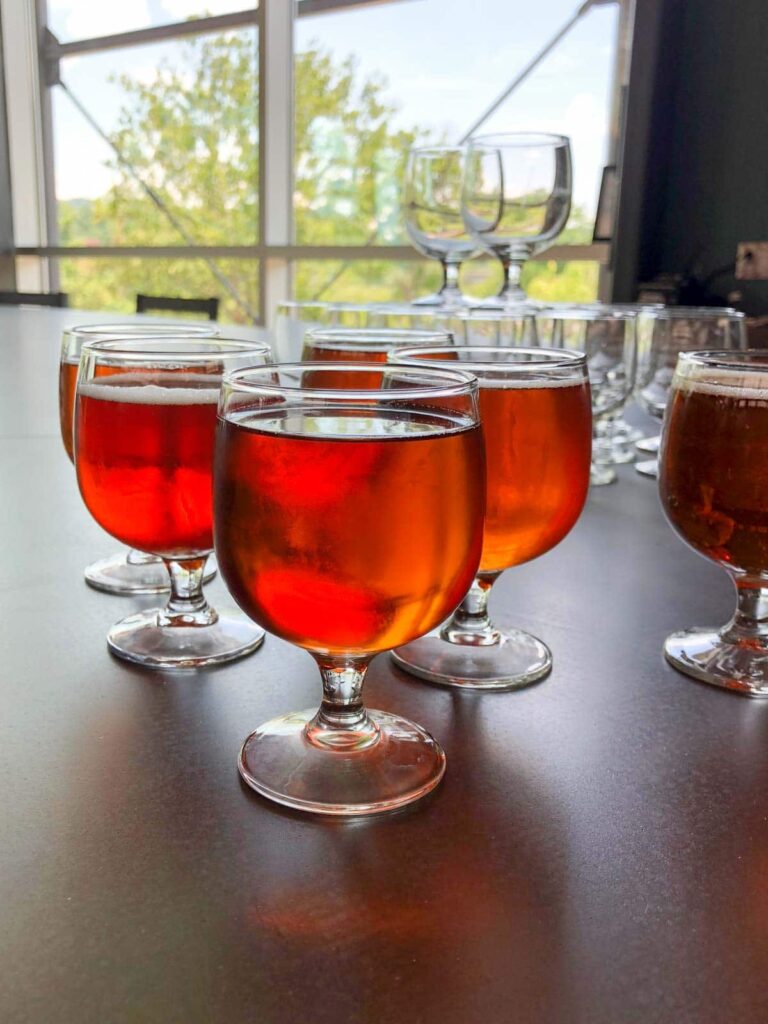 New Belgium brewery was probably my favorite stop on this whole trip!

I’m not even a huge beer drinker, but our tour guides (Mike & Mike) were AWESOME, friendly, hilarious, genuine people. I simply love when people enjoy what they do and believe in what they (and their company) stands for. 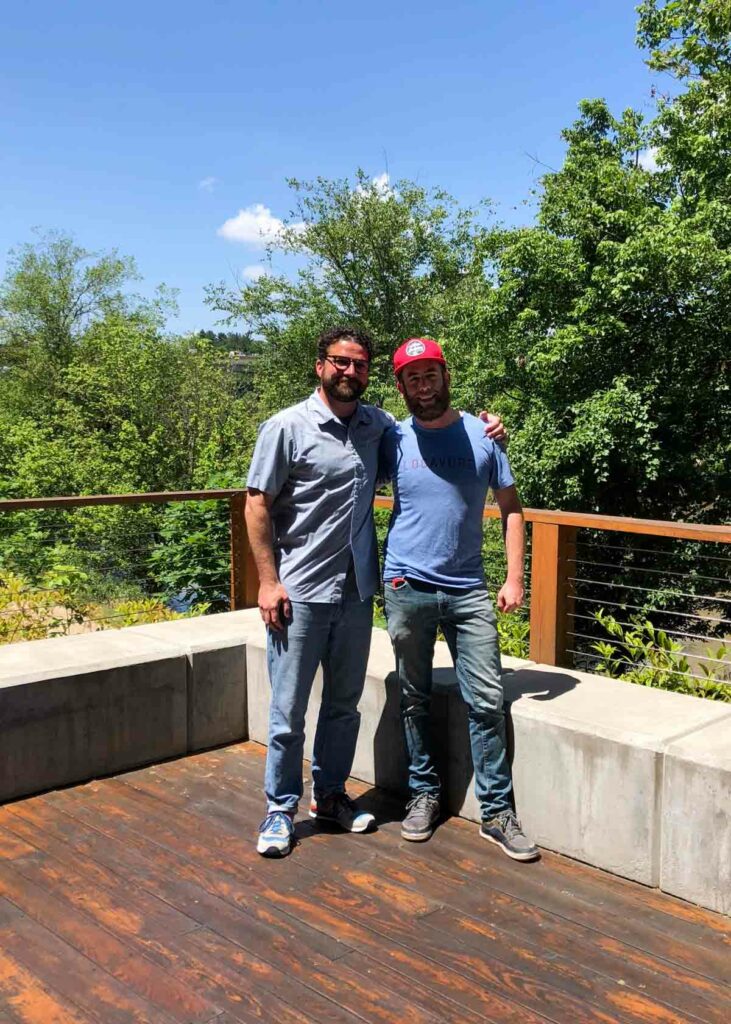 The biggest message I got through my head during this tour was that New Belgium brewery cares about sustainability.

Everything from their “trifecta of LEED certifications” down to collecting steam from one processing vessel to use as water later. Their logo is even a BIKE – a fitting symbol, no?

Random fact: They also do small brew testing for new brands, and for their small batches they work with the local River Bend malt house. (A “small batch” starts at 16-17 full size kegs.)

New Belgium Brewing started in Colorado, so when they opened the location up in Asheville they faced a challenge I never even thought about – they had to start by making their most popular beer, Fat Tire, taste the same as it does in Colorado.

Consistency of product is very important, and things like environment, different elevation, and even the water all affect it! Who knew? 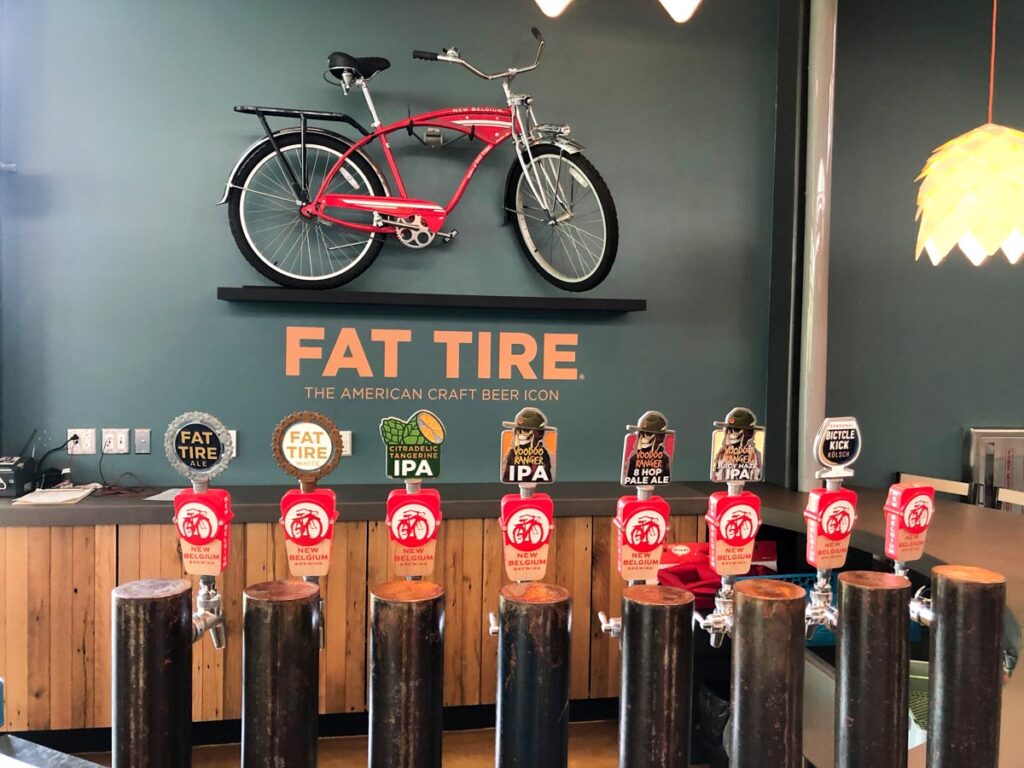 This Western Carolina Livestock sign is made up of old photograph shots of the 17 acres that they are now occupying. (Note to self: home decor idea!) 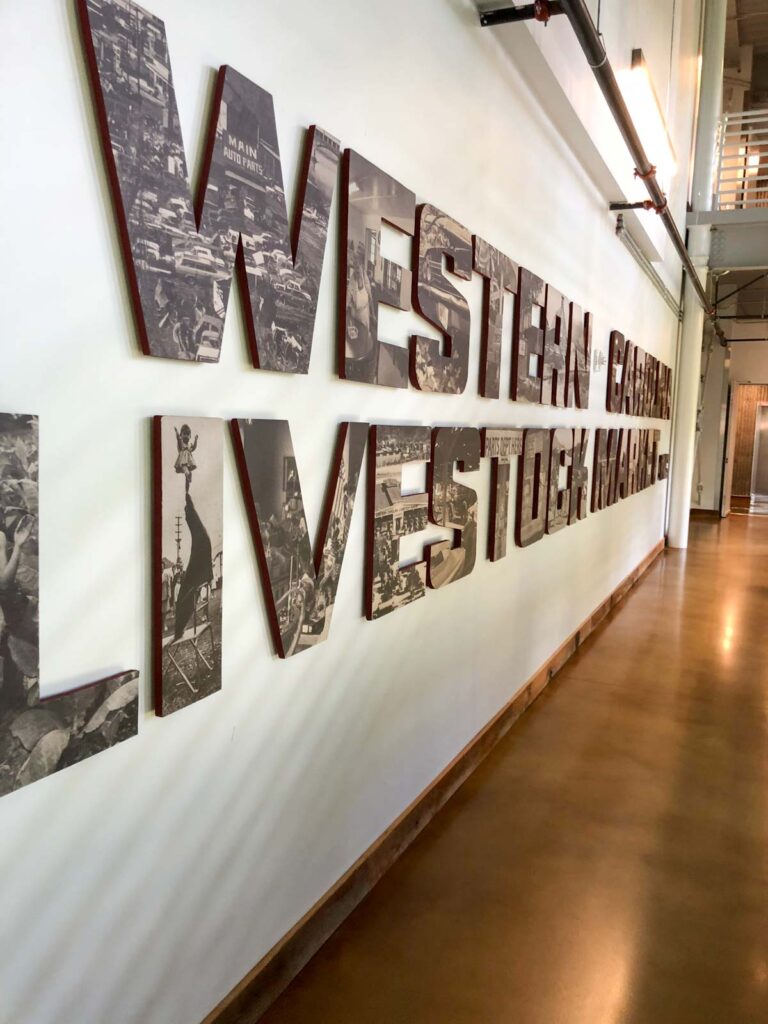 And from there – take the slide, not the stairs.

A trinket from each employee. (I was sworn to secrecy which one was contributed by our guide.) 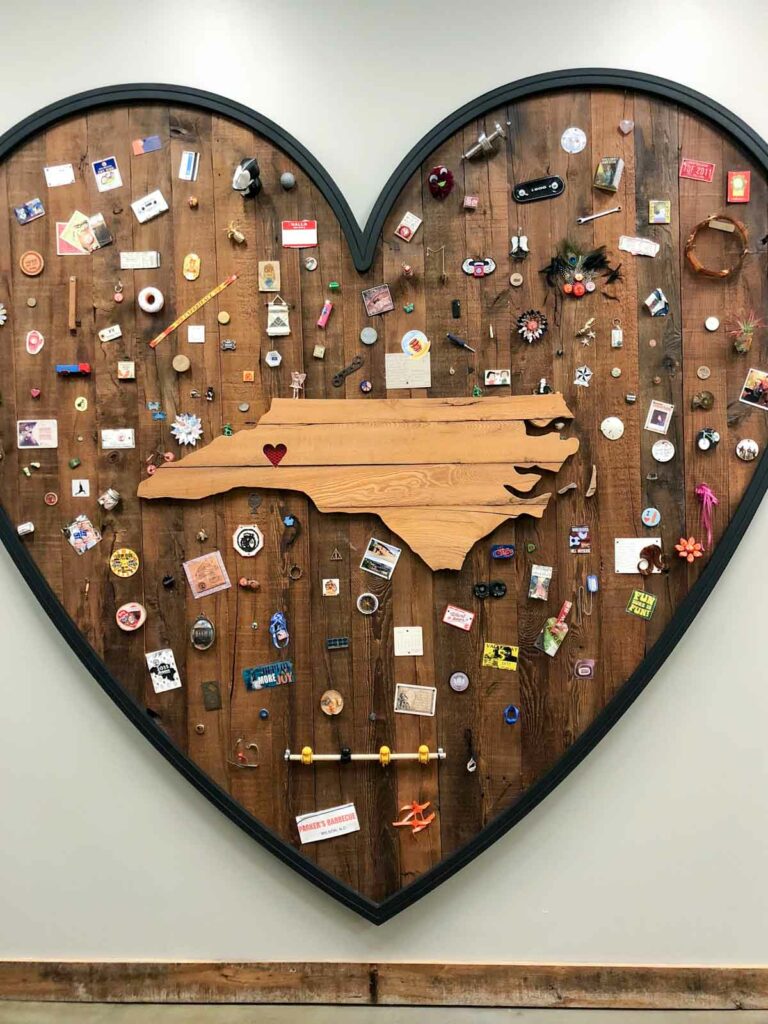 The cellar is where all the magic happens.

“That’s Bonesy! Bonesy don’t do anything!” (Told you they have fun.) 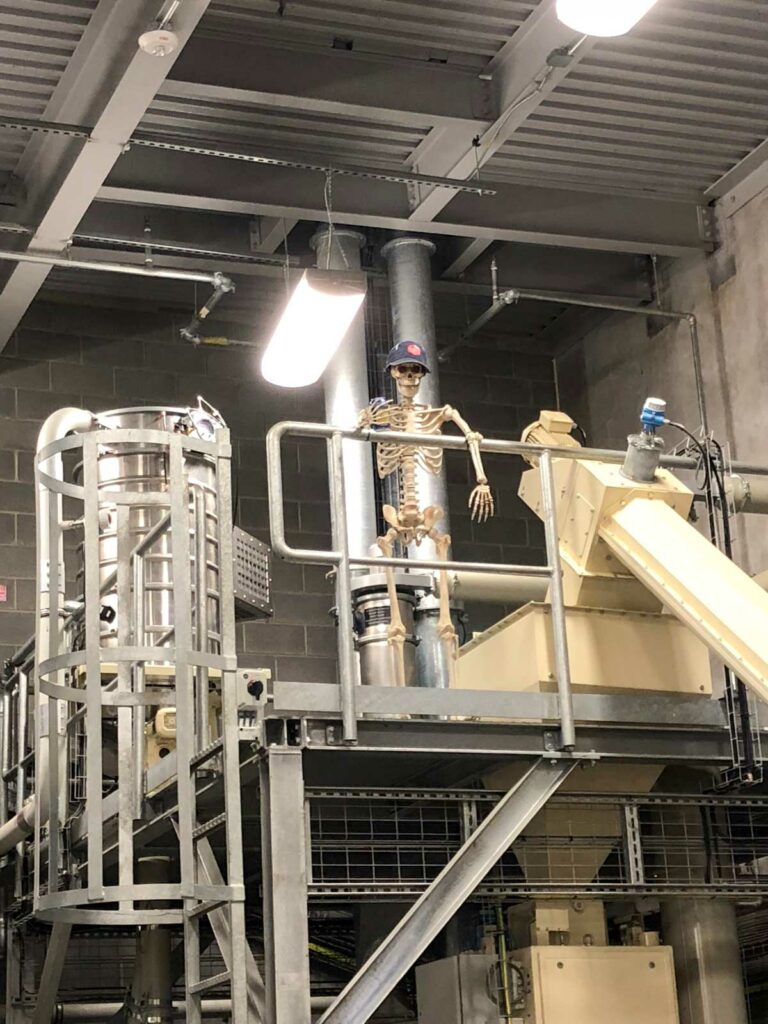 We got the exclusive “deck view” of the beer production line.

And that’s me, picking a beer off the line, not looking at the right camera. 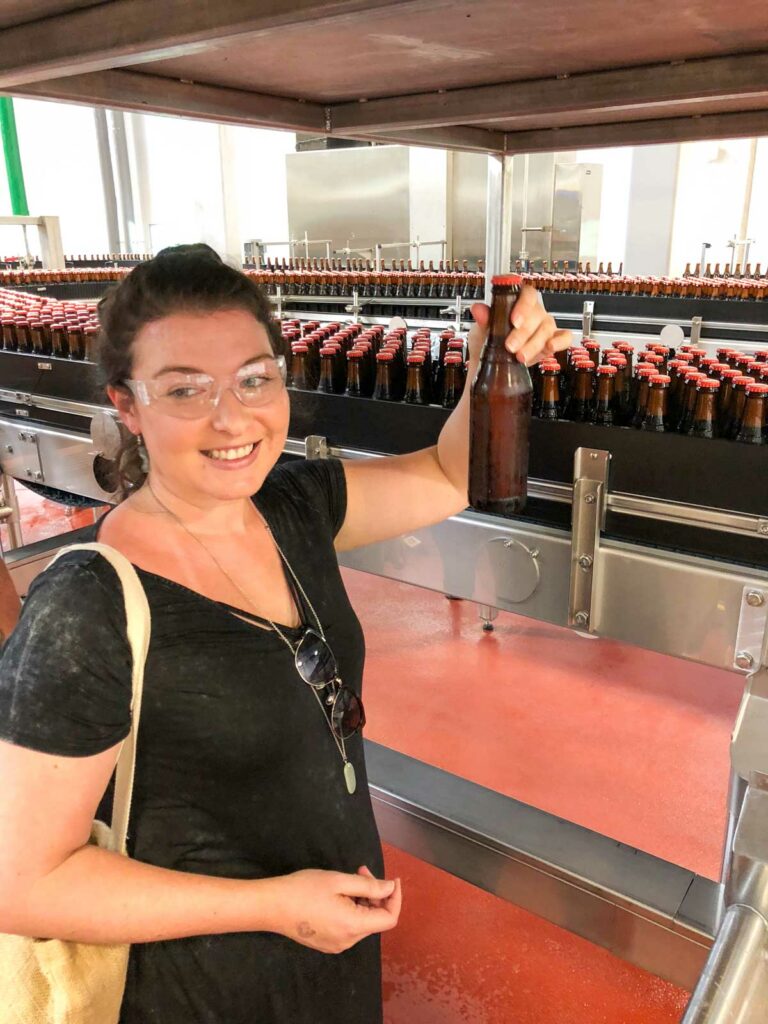 If you want to work at New Belgium Brewery – good luck! Our tour guide Mike joked that he got his job way before there were 400 applicants per opening.

Some of their employee perks: At your 5-year anniversary, you get a trip to Belgium! After 10 years, you can take a 4-week sabbatical anywhere you want. They also give their employees a bike (surprised?), and a 12-pack of choice per week.

They also have a “taste master” program, where you can give feedback on their brews. 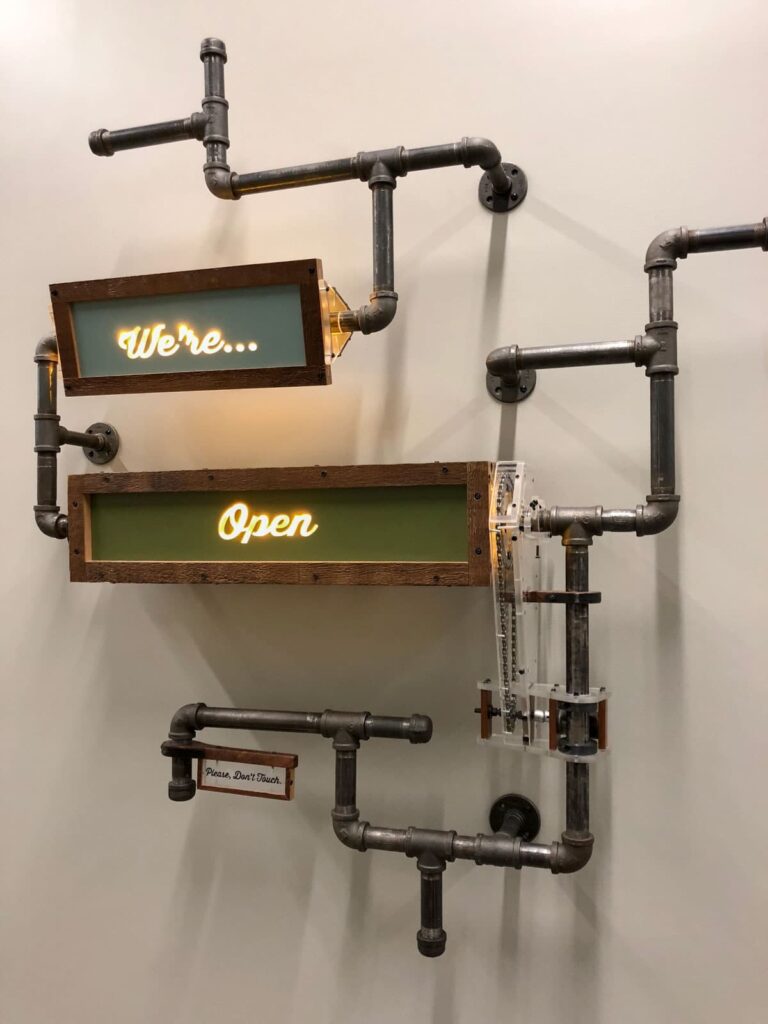 I don’t have any idea why there’s a tiger jumping out of the Fat Tire sign but this picture was too perfect not to include. 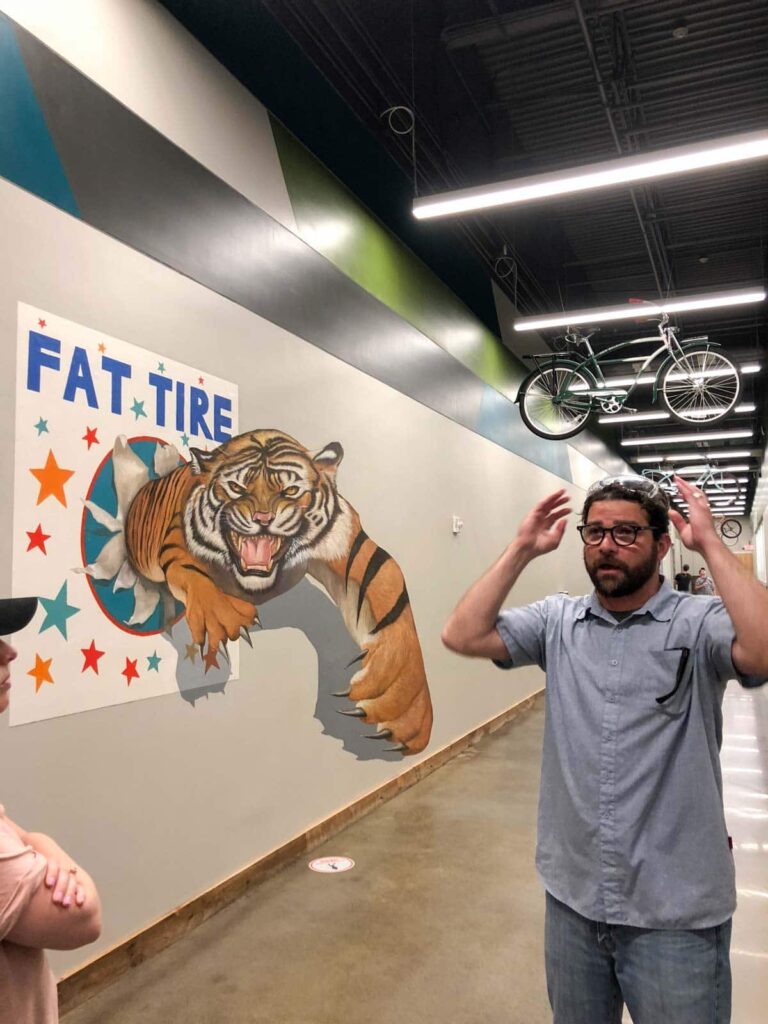 Asheville is apparently known as the “Beermuda triangle” with more beer brewed per capita than any other city. Beer city!

So while there are many choices to get your drink on in Asheville, you should definitely check out New Belgium brewery. Their tours are about 90 minutes long and free. There has never been a script, so they are all different depending on your tour guide! There is also a paid private tour available.

They also have an area where you can just hang out, drink a beer and enjoy their beautiful views. So if you’re ever in the Asheville area, hit them up! 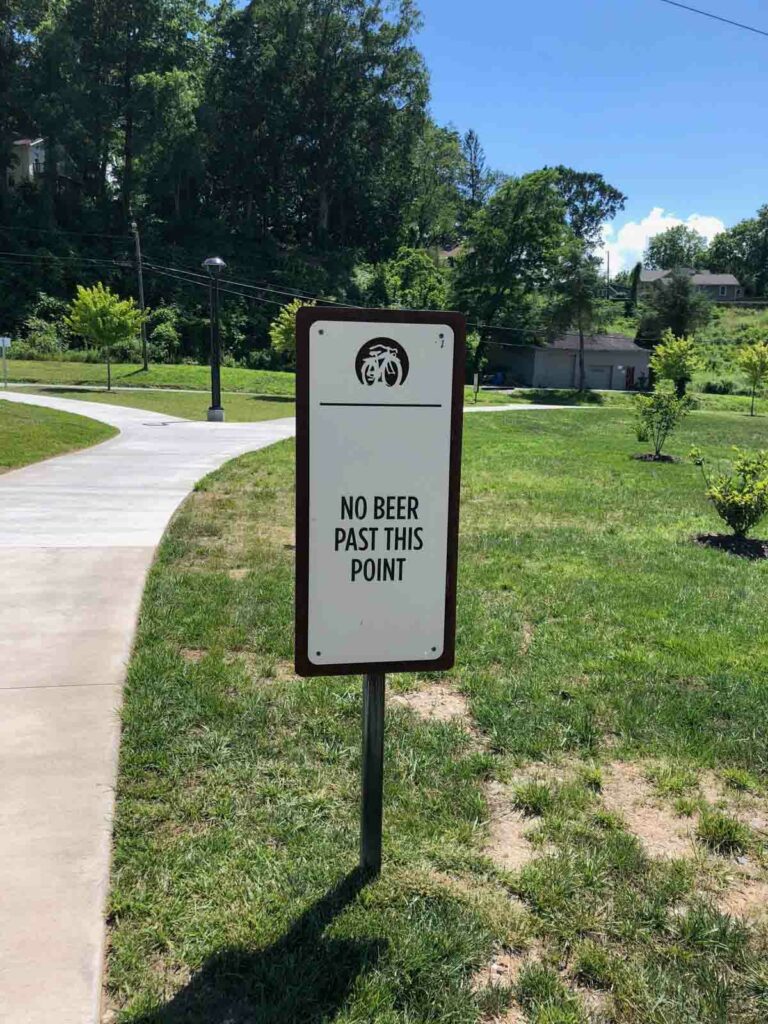 You should take part in a contest for one of the highest quality websites online. I most certainly will recommend this website!